The following complaint was signed, notarized and mailed by certified mail to the Maryland Ethics Commission on February 20, 2020.

Submitted by the Maryland Green Party

1. From 2015 to 2018, his first three years as governor, Gov. Hogan made a total of an unprecedented $2.4 million, according to his tax returns, which he released during his 2018 reelection campaign. His profits from the HOGAN real estate company far exceeded the $180,000 annual salary for governor. Gov. Hogan has made more money as governor than any other governor in the history of the state and is the only governor to have made millions of dollars while in office. See Eric Cortellessa, Who Does Maryland’s Governor Really Work For?,  Washington Monthly, Jan-March 2020,
https://washingtonmonthly.com/magazine/january-february-march-2020/who-does-marylands-governor-really-work-for/, and Lex Pareen, The Most Popular Crook In America, New Republic, Jan. 10, 2020, https://newrepublic.com/article/156183/popular-crook-america and Edward Ericson Jr., What Gov. Hogan’s Ethics Disclosures Tell Us — And What They Don’t, Maryland Matters, Feb. 27, 2018, https://www.marylandmatters.org/2018/02/27/what-gov-hogans-ethics-disclosures-tell-us-and-what-they-dont/

2. Gov. Hogan is the founder of the Annapolis-based Hogan Companies, which has continued to thrive since Hogan took office in 2015. Gov. Hogan maintained ownership of HOGAN, a multipurpose real-estate brokerage firm, when he became governor. The governor’s brother, Timothy Hogan, was left in charge of the company. Gov. Hogan was kept apprised of the company’s dealings.

3. Maryland ethics law bans officials or employees from making decisions on matters in which they have an economic interest. But the law states that this prohibition does “not apply if participation is allowed as to officials and employees subject to the authority of the [Maryland State] Ethics Commission.”  One day after his gubernatorial inauguration, on January 22, 2015, Maryland State Ethics Commission executive director Michael Lord provided “interim approach pending the full resolution of possible financial interest issues.” The guidelines included:

The Law provides that an official may not participate in a matter if (1) the official or a qualifying relative (defined as parent, spouse, child or sibling) has an interest in the matter, or (2) any of the following is a party to a matter: (i) a business entity in which the official has a direct financial interest; or (ii) a business entity, including a limited liability company, of which the official or a qualifying relative is an officer, director, trustee, partner or employee. Given these limitations, the Governor should not personally participate in any matter that may come before him or a state agency that involves [his] businesses, or any matter in which he or any of his qualifying relatives or a company that employs them have an interest. [Emphasis added.]

The Ethics Commission said in an August 2019 memo to state workers that financial-interest exceptions do not allow officials to participate in government decisions that impact their outside business: “Even when the Commission grants an exception or exemption, all of the other provisions of the Ethics Law continue to apply.”  See Eric Cortellessa, Ibid.

4. A major issue of concern with Gov. Hogan is Maryland investing tens of millions of dollars in transportation improvements he advanced that are near his real estate investments thereby increasing the value of those investments. Gov. Hogan repeatedly steered state transportation development money to projects that would increase the value of his real estate holdings. This has included roads, interchanges, the construction of embankments, exit ramps, and median piers, pavement upgrades; park-and-ride lots, and bridges.This map shows where Hogan administration transportation projects are in relation to his real estate holdings. 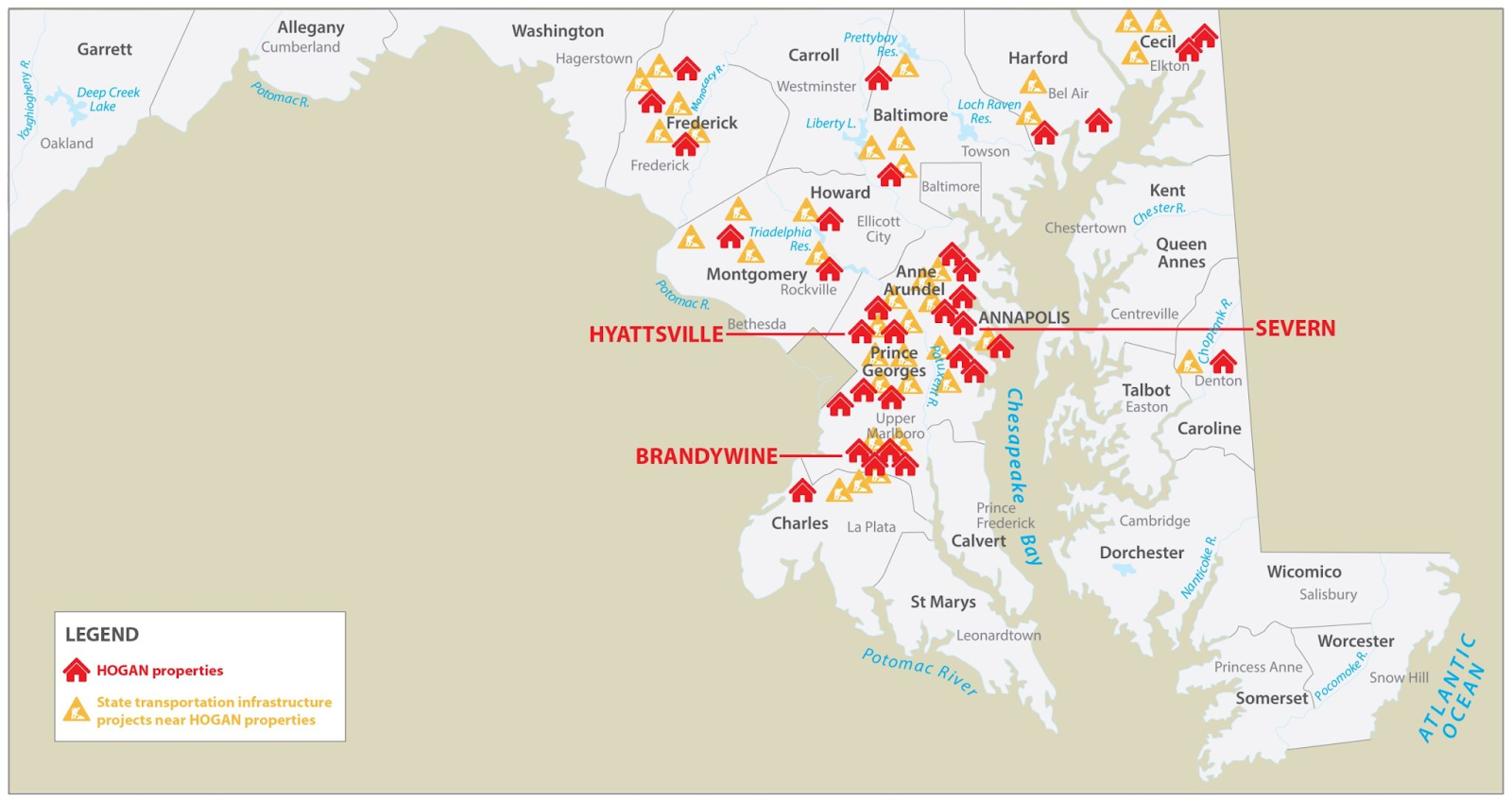 The governor should have recused himself of projects that would impact his real estate holdings. Richard Painter, a professor of corporate law at the University of Minnesota Law School and a former chief ethics lawyer for President George W. Bush, told Eric Cortellessa that Gov. Hogan should have been prohibited from participating in those decisions saying, “The [ethics law] language suggests that he should recuse because the official or employee or qualifying relative—he himself—has an interest in the matter and he knows of the interest.” The governor has never recused himself from a decision in his transportation budget that could impact his properties. See, Eric Cortellessa, Ibid,  Lex Pareen, Ibid and  and Jaisal Noor, Report: Maryland’s Governor Used Tax Dollars to Enrich Himself, The Real News, January 16, 2020, https://therealnews.com/stories/maryland-govenor-hogan-tax-dollars-highway-real-estate

5. Gov. Hogan’s real-estate business has grown significantly while he has been in office. In 2014, the year before he became governor, his company had ownership in 30 real-estate limited-liability companies, or LLCs, according to his financial-disclosure forms. Now, he has 43 LLC’s. HOGAN is currently selling or leasing more than 20 properties throughout the state, according to its website, and has completed other real-estate deals over the past five years. Gov. Hogan rejected creating a blind trust and has maintained ownership and control of the company while serving as governor. He handpicked trustees to run his company who have kept him informed of its business dealings. And as governor, he has advanced highway and road construction projects that directly boosted the value of land owned by his company. See, Eric Cortellessa, Ibid. and and Lex Pareen, Ibid.

6. Gov. Hogan held ownership in a company called Brandywine Crossing Realty Partners LLC. The company was chartered on March 9, 2015, and it became a controlling partner for a parcel of land behind the Brandywine Crossing Shopping Center in Prince George’s County. Gov. Hogan greenlit the construction of an interchange in Brandywine, Maryland. He allocated $58 million for that project to go forward located just down the road from his real estate holdings.

Gov. Hogan’s business has been increasing its portfolio near these Brandywine transportation improvements. In 2017, HOGAN purchased a new parcel of land for $2.2 million near the interchange. A Maryland real-estate newsletter reports HOGAN  plans to build townhouses on this land. The company bought 14 additional parcels of land in Brandywine near the interchange for more than $1.2 million, according to public land records.

Gov. Hogan’s company subsequently established a second, 75-acre development, proposing town houses, garden apartments, medical office space and an assisted living center, less than a mile up the road from the planned new overpass project, expected to be completed by the summer of 2019.

Eric Cortellessa of the Washington Monthly asked Mike Sponseller, a HOGAN vice president, whether the interchange project contributed to the firm’s increased investment in the area. “Yeah,” he said. “Infrastructural updates are incredibly important to facilitating new development. Infrastructure contributes to land value, contributes to access, of course.”

Gov. Hogan awarded the contract to build the Brandywine interchange to Facchina Construction Company, according to records obtained by the Washington Monthly through Maryland’s Public Information Act. They report that Facchina donated to Gov. Hogan’s reelection campaign one year before receiving the contract. The interchange is scheduled to be completed by the late spring of 2020. See, Eric Cortellessa, Ibid and Jaisal Noor, Ibid.

7. Eight days after his election, on November 12, 2014, HOGAN bought a parcel of land from Maryland’s State Highway Administration in Severn, Maryland for $400,000. The sale was conducted through a public auction with only one bidder, Timothy Hogan. In November 2014, HOGAN created a new LLC called the Villas at Severn Crest. During Gov. Hogan’s tenure as governor the State Highway Administration began a number of transportation projects that could boost the value of that property, including intersection improvements and road resurfacing less than a mile away, which started in 2018. See, Eric Cortellessa, Ibid.

8. In March 2015, HOGAN chartered a company in West Hyattsville that bought a parcel of land a half mile off Queens Chapel Road  to develop townhouses. In his 2017 transportation budget, Gov. Hogan put $23.5 million in road and crosswalk improvements on Queens Chapel Road less than a mile from the property. Lawmakers said they were not told at the time that he owned a property near the road improvements.  Maryland ethics law requires state officials to publicly disclose their conflict of interest. Lack of disclosure has been a problem in other transportation projects that benefitted HOGAN properties. See, Eric Cortellessa, Ibid.

9. Another project that requires investigation for ethics violations is Diamondback Investment Co. LLC. Gov. Hogan’s company owned 25% of Diamondback. Hogan ally, Anne Arundel County Executive Steve Schuh (a millionaire investment banker from Crofton, MD) had green lit the project but there was widespread public opposition. Schuh slowed, but did not cancel the approval in response. This pushed the timing into what Schuh thought would be the start of his second term in office. County Executive Steuart Pittman emerged as a strong challenge to Schuh and HOGAN divested from Diamondback. Pittman won, and Hogan immediately hired Schuh to a position in his administration (as opioid crisis czar). Pittman then passed stronger environmental protections which limited future development.

Diamondback is one of three development groups that have given written notice of a lawsuit after the Enclave at Crofton got a red light from the Office of Planning and Zoning. The letter giving notice of the claims also lists Brookfield Crofton Grove, LLC., and 1691 Limited Partnership.

10. Gov. Hogan profited by redirecting money for mass transit in Baltimore to transportation projects that benefitted his company. The governor’s  most controversial policy decision was to cancel the Red Line—a planned $2.9 billion metro rail line through Baltimore, for which the state had already acquired land and for which the federal government had agreed to $900 million in federal aid from the US Department of Transportation. This decision was very damaging to working class, primarily black neighborhoods in Baltimore that have been neglected for generations but freed up a lot of money the state then spent on roads, highways, bridges and other transportation projects that benefitted HOGAN. See, Eric Cortellessa, Ibid, Lex Pareen, Ibid and Jaisal Noor, Ibid.

11. The Hogan administration acts as a broker on deals and what that means is that he’s bringing in a lot of private income on undisclosed brokerage fees. The governor is in charge of regulating the real estate business in Maryland in a whole host of ways. He gives out contracts for many different projects, like on the Brandywine interchange. He gave it to Facchina Construction, which was a big campaign contributor. Gov. Hogan has not revealed payments he has received from specific real-estate transactions while in office. Eric Cortellessa reports, “He’s getting paid by developers all across the state—who he’s in charge of regulating in one way or another—and the public has no idea who they are,” said Democrat John Willis, a former Maryland secretary of state and now a University of Baltimore politics professor and a historian of Maryland politics and government.  Legislators and Maryland government officials past and present report HOGAN is getting paid by real estate developers all across the state and the public doesn’t know who they are. What contracts have they gotten? What favors have they gotten? Maryland Matters reports “the disclosure process for state officials is so opaque, it leaves many questions unanswered about the extent of Gov. Hogan’s holdings, how much he knows about them, and what potential conflicts of interest, if any, may exist.” The form lists only the names of the LLCs, with no information about what the businesses do or own. See Edward Ericson Jr., Ibid, Jaisal Noor, Ibid, and Eric Cortellessa, Ibid

12. For the reasons stated in this complaint the Maryland Green Party requests the Ethics Committee to investigate the potential ethical violation, conflicts of interest and failure to disclose how Gov. Larry Hogan would profit from decisions made while he was in office.

I swear under penalty of perjury that the information I have provided is true and accurate to the best of my knowledge, information and belief.

Personally appeared before me, a Notary Public, in and for said county and state, on this ________ day of __________________, 20____, the within named Kevin Zeese, known to me, or satisfactorily proven, to be the person whose name is subscribed to the within instrument and who acknowledges that he executed the same for the purposes therein contained.