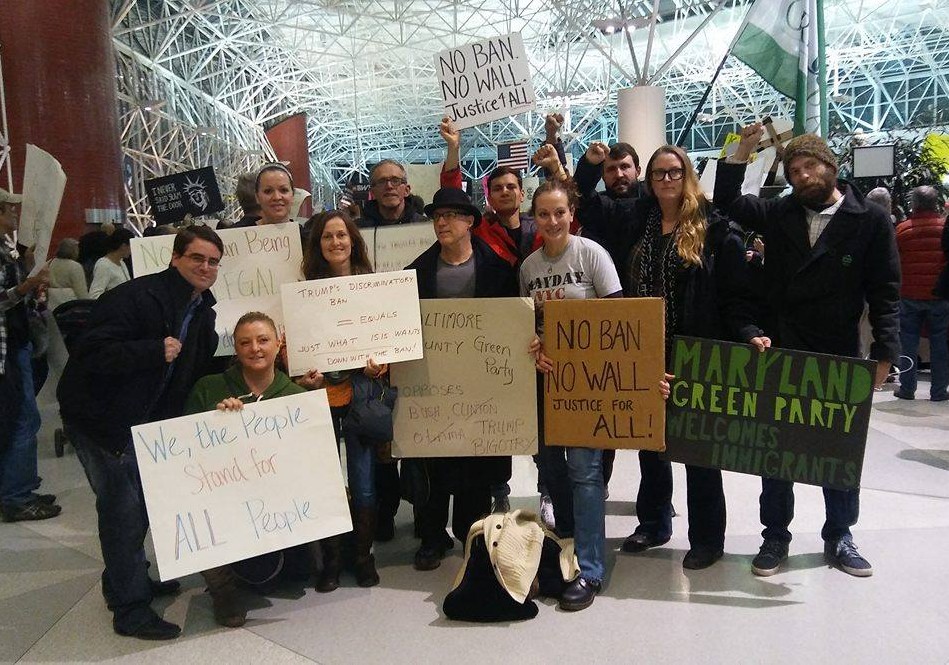 The Maryland Green Party calls on President Trump to immediately rescind his Executive Order, “Protection of the Nation from Foreign Terrorist Entry into the United States.” This order is rooted in xenophobia and anti-Muslim bigotry, and its ban on refugees is a specifically hideous act towards the most vulnerable in need.

This order temporarily bars immigrants and refugees from seven Muslim-majority countries from entry into the United States, and permanently bans Syrian refugees. This discrimination acts as a de-facto Muslim ban, and its prioritizing of “minority populations” in Muslim-majority countries is a thinly veiled attempt to establish a religious test for aid. As we discovered only after Trump’s impromptu signature, it bans duel citizens, green card holders, and visa holders, creating uncertainty surrounding the immigration status of thousands of men and women who are pillars of our communities.

The Maryland Green Party stood in solidarity with the protests at Baltimore-Washington International Thurgood Marshall Airport and in Washington DC. Standing up to tyrannical executive orders is not new for us. Under Democrats and Republicans alike, the Maryland Green Party opposed illegal and unconstitutional executive powers. Trump’s executive order is just one in a long line of power grabs claimed after 9/11 in the name of “keeping us safe.” Other powers inherited freely to President Trump from the Democrat Barack Obama include the right to imprison indefinitely, to torture, to declare war, to declare a nuclear first strike, and to assassinate anyone on the planet, including American citizens, without due process or any checks and balances.

We are glad the Democratic Party is rediscovering the value of the Bill of Rights and welcome them back in the fight against authoritarianism.

As we stand with the oppressed in the years to come, know that together, we are unstoppable! Another future is possible!